Disney’s big new cruise ship, the first the company has added to its cruise line in a decade, made her maiden arrival in Florida this morning. The predawn sail-in months behind schedule in part due to the pandemic could not dampen the enthusiasm of the local community and Disney fans. Accompanied by two tugs, the Disney Wish treated fans to a laser light show and fireworks to celebrate her arrival which kicks off nearly a month of festivities as she enters service.

The approximately 144,000 gross ton cruise ship completed her delivery voyage from Bremerhaven, Germany where she was handed over to the cruise line by her builders Meyer Werft. She made a brief stop in the Azores on June 13 and yesterday, June 19, stopped at the cruise line’s private island in the Bahamas known as Castaway Cay. She was waiting offshore near the entrance to Port Canaveral, her new homeport, and began her arrival early this morning, June 20. 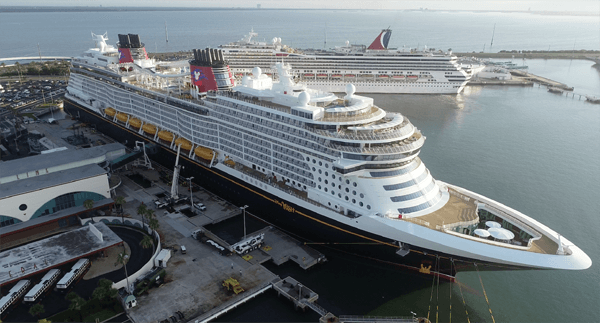 “We have anticipated this homecoming of the Disney Wish for some time and know that our entire port community is excited to have her sailing from our port,” said Port CEO Capt. John Murray. “We are proud of the longstanding partnership we have with Disney Cruise Line, and the arrival of the Disney Wish adds to the growing number of impressive cruise ships providing high-quality guest experiences from our port.”

On June 29, Disney has scheduled their next production with the gala christening ceremony for the vessel at Port Canaveral. She will also be hosting travel agents and completing final preparations and crew training before her July 14 maiden voyage to the Bahamas.

At 1,119 feet in length, the Disney Wish is similar to the previous two cruise ships the cruise line also built at Meyer Werft, but substantially larger than the company’s first cruise ship the Disney Magic introduced in 1998, and her sister ship the Disney Wonder. The new ship has 1,254 passenger cabins with a passenger capacity of 4,000 and 1,555 crewmembers. The gross tonnage of the ship is about 10 percent larger than the Disney Dream and Disney Fantasy with the added space used to create new passenger amenities. One of the features that is drawing a lot of attention is a 760-foot-long water ride which Disney is calling its first attraction at sea.

The first of three LNG-fueled cruise ships that Disney is building, she also marks another step for Port Canaveral in rebuilding cruise operations after the long pause during the height of the pandemic. Port officials are also highlighting that it is the second LNG-fueled cruise ship in North America, and with the LNG infrastructure established at the port, both LNG cruise ships are currently homeported at Port Canaveral. The other is Carnival’s Mardi Gras.

Two weeks ago, the Disney Dream which had been sailing from Port Canaveral for a decade departed for the last time. To make space for the new ship at the central Florida port, she was repositioned to Miami for cruises to the Bahamas before heading to Europe in 2023. 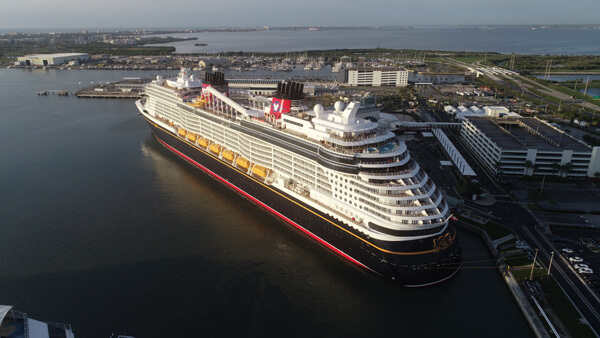 Coronavirus FAQ: Can You Information Me By way of The (Ever-Altering)...