Boogie Ellis scored 19 points and No. 24 USC opened a double-digit lead in less than three minutes and scored a 98-71 win over Dixie State on Monday night.

Max Agbonkpolo scored 17 points in his career and Isaiah Mobley added 14 for the Trojans (4-0). Chevez Goodwin had 12 points and 11 rebounds.

Cameron Gooden and Frank Staine each scored 17 points for the Trailblazers (1-4), while Hunter Schofield added 10 points and eight rebounds. Dixie State, who moved to Division I last season, played against USC for the first time.

The Trojans quickly started their second home game of the season. A pair of 3-pointers from Ethan Anderson and Mobley gave them a 13-3 lead of just 2:54 minutes, and they increased it to 22-5 in less than eight minutes. 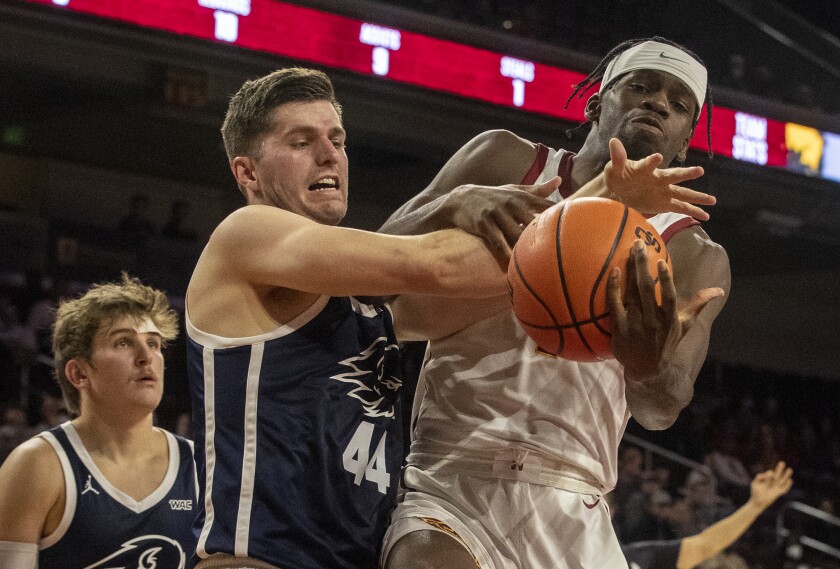 USC striker Chevez Goodwin battles Dixie State’s Hunter Schfield at the Galen Center on Monday for a rebound in the first half.

Dixie State was able to hold its own until the end of the first half, USC went into halftime with 47:36. The Trailblazers were in the single digits at 53-44, 17:50 remaining before USC ran away.

The Trojans pushed their lead to over 20 for the first time at 73-51 at 11:24 after a three-point game by Agbonkpolo.

Dixie State shot just 31.6% out of the field and was outrebounded 52-38. The Trailblazers had 12 offensive rebounds to 11 for the Trojans.

No. 10 Kentucky cruises in 86-52 victory over North Florida

How a meals enterprise tied to the lodge trade is recovering...